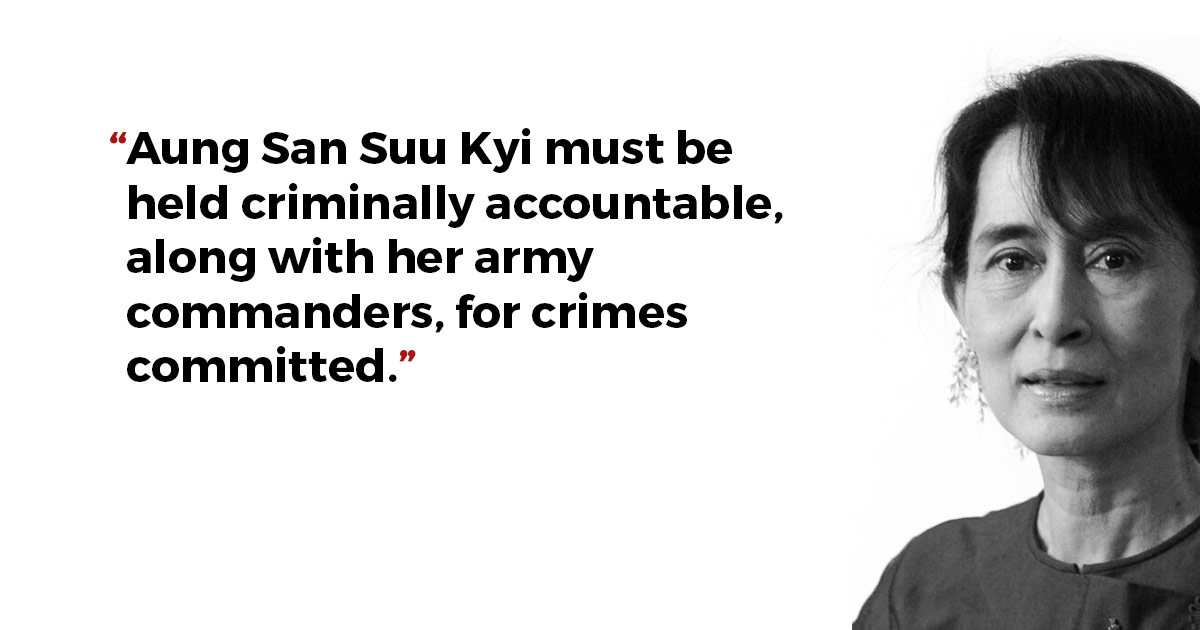 As Nobel Peace laureates, we call on Aung San Suu Kyi, a Nobel Peace Prize recipient, to publicly acknowledge the crimes, including genocide, committed against the Rohingya. We are deeply concerned that instead of condemning these crimes, Aung San Suu Kyi is actively denying that these atrocities even occurred.

The Gambia filed a lawsuit in November 2019 with the International Court of Justice – the United Nations’ highest court – for atrocities committed against the Rohingya by Myanmar. Proceedings start on December 10 and Aung San Suu Kyi, Myanmar’s state counsellor, will appear before the court.

Aung San Suu Kyi must be held criminally accountable, along with her army commanders, for crimes committed. Click To Tweet

We commend The Gambia for taking this step to hold Myanmar responsible for the genocide against the Rohingya and for advancing justice for the victims of these crimes. Just days after the International Court of Justice complaint was lodged, the International Criminal Court announced that it will be investigating crimes committed against the Rohingya.

The Rohingya, a Muslim and ethnic minority in Myanmar’s Rakhine State, have suffered decades of systematic discrimination with the government of Myanmar not even recognizing them as citizen. In 2017, Myanmar’s military, police and local militia burned Rohingya villages, systematically shot and killed Rohingya and committed acts of sexual violence and rape – used as a weapon of war –  against women and girls.  Since August 2017, Bangladesh has received close to 700,000 Rohingya refugees with now close to one million Rohingya living in refugee camps in Bangladesh. Many fear repatriation as there is no guarantee for their safety if returned to Myanmar.

As people of peace, we urge Aung San Suu Kyi to address the systematic discrimination of the Rohingya in Rakhine State, and ensure the Rohingya’s right to nationality, land ownership, freedom of movement and other fundamental rights. We also urge her to exercise her personal and moral responsibility towards the Rohingya and acknowledge and condemn the genocide committed under her watch.

Aung San Suu Kyi must be held criminally accountable, along with her army commanders, for crimes committed.

In February 2018, three Nobel peace laureates – Tawakkol Karman, Shirin Ebadi, and Mairead Maguire – visited the Cox’s Bazar area in Bangladesh. They spent time with and listened to the stories of over 100 women refugees. After hearing testimonies describing how security forces burned villages, tortured, killed and systematically raped women and girls—as well as reports from humanitarian organizations and UN officials— the Laureates concluded that the attacks on the Rohingya of Rakhine State amounted to crimes against humanity and genocide.  They requested visas to meet with Aung San Suu Kyi in Myanmar, but permission to travel to Myanmar was not granted.

© Copyright 2021
Faith Coalition to Stop Genocide.
A project of Justice for All, powered by Sound Vision Foundation
All Rights Reserved. View Privacy Policy.
Back To Top