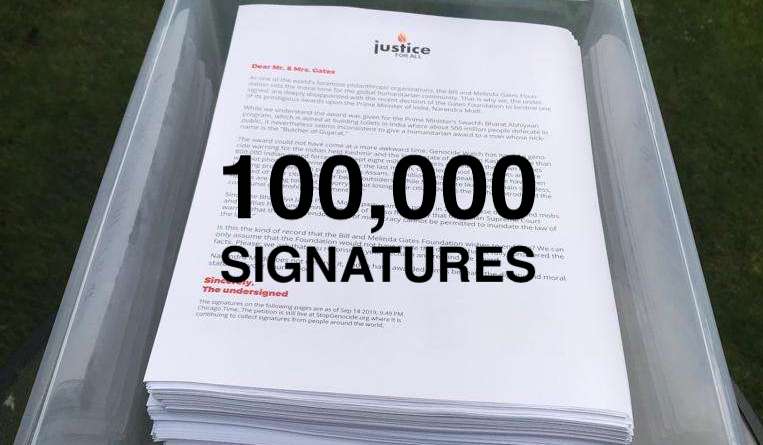 SEATTLE, WA – Today, a crowd of more than 100 outraged human rights supporters marched to the Bill and Melinda Gates Foundation’s headquarters and delivered more than 100,000 petition signatures against a forthcoming award to Prime Minister Narendra Modi. The group opposes the award, slated to be delivered on September 24 in New York City during Modi’s trip to the United States, due to ethnic violence, oppression of religious minorities, and human rights abuses throughout India and the Kashmir region under the PM.

Launched by interfaith coalition Justice For All as part of their Stop Genocide project earlier this month, the petition quickly gained national and international attention. Shortly after the effort began, three Nobel Peace Laureates sent a letter directly to Mr. and Mrs. Gates highlighting the fact that Modi has taken India into a dangerous and deadly place for Muslims through mob violence, stripped citizenship, and militarized isolation – all signs for state-sponsored violence.

“The Muslim community, interfaith advocates, and humanitarians all across the country have joined this cause because Modi has been encouraging mass-violence against Muslims for decades,” said Abdul Malik Mujahid, Chair of Justice For All, the leading organization of the Stop Genocide project. “By honoring Modi, the Bill & Melinda Gates Foundation is compromising their own goal of setting the moral tone for global humanitarianism. They should rescind their award and take a stand against systematic oppression that can lead to outright genocide.”

This pressure on the Gates Foundation comes at a time when India is already facing scrutiny and condemnation across the international community because of Modi’s aggressive policies. Recently, the Genocide Watch issued a “genocide warning” for India-held Kashmir and the Indian state of Assam.

Despite this, the Bill & Melinda Gates Foundation is set to give the award to Modi next week during his upcoming trip to the United States. Until then, Justice For All will continue putting pressure on the foundation to consider their responsibility to advance human rights against the rise of nationalism and state-sponsored violence across the world.

“While the Gates Foundation was not courageous enough to meet and accept our request to rescind this award today, we will not be deterred in our efforts to call attention to the ethnic violence and human rights abuses under Prime Minister Modi,” said Javed Sikander, who helped deliver the 100,000 petition signatures to the foundation’s headquarters. “This award, if delivered next week, would send a terrible signal to dangerous leaders around the world. Bill and Melinda Gates can still do the right thing, but time is running short.”

About Justice For All: An NGO with Consultative Status at the United Nations (DPI), Justice for All is an Illinois registered nonprofit organization with its main office based in Chicago, with staff and volunteers in Washington DC, New York, Boston, Texas and other locations. The organization, which was incorporated in 1999, grew out of advocacy efforts on the human rights abuses experienced in Bosnia and later Kosovo during the break-up of the former Yugoslavia. At that time, it was instrumental in shaping the discourse around the ‘genocide’ debate and campaigned to declare rape as a war crime in international law. Justice for All is funded by a broad range of faith community donors who take a keen interest in the furtherance of human rights both in the United States and outside its shores. Its broad mandate to educate fellow citizens on social justice concerns and provide guidance for action through regular newsletters and extensive media engagement.