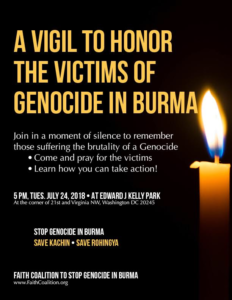 The Faith Coalition to Stop Genocide in Burma will host a Vigil to honor the lost Rohingya & Kachin lives in Burma on July 24th at the Edward J. Kelly Park near the State Department at 5 p.m. This event is in conjunction with the State Department’s first-ever Ministerial on Religious Freedom, launching their global religious freedom initiative.
The Faith Coalition is calling on the U.S. government to more aggressively intervene in the situation and to engage in sanctions against the Burmese government and its military. Since August 2017 more than 700,000 Rohingya refugees have fled Burma due to horrific conditions of torture, rape, and murder at the hands of the Burmese government. The Kachin Christians in Burma’s Northern region are now facing the same treatment as the genocide continues, villages and churches burned.

Join in a moment of silence to remember those suffering the brutality of a Genocide. Come and pray for the victims. Learn how you can take action.
The Faith Coalition to Stop Genocide in Burma, is a united group of American faith leaders from diverse religious backgrounds who have come together out of a deep concern for the suffering of the indigenous Rohingya of Burma/Myanmar who face the risk of genocide and annihilation at the hands of the Burmese military.

Christians Forced to Sign Papers Vowing Not to Pray in Church, Curb Their Faith

Rohingya Mother Remembers Her Rapists Every Time She Holds Her Baby