Imam Abdul Malik Mujahid, Chair of the Burma Task Force, just left the International Court of Justice (ICJ) in The Hague in the Netherlands hours ago. He was attending hearings for the Gambia’s lawsuit against the Burmese government for crimes against humanity in relation to its genocide of its Rohingya minority. Both Burma and the Gambia are signatories of the United Nations’ Genocide Convention.

One hundred and forty-nine nations have signed the Genocide Convention, but it took the tiniest country in Africa to walk the talk.

The Gambia’s case against Burma takes the legal effort forward in a critical way. I heard every word of it, and hugged H. E. Abubacarr Tambadou, the country’s Minister of Justice. He is an experienced war crimes prosecutor who served for more than a decade at the international criminal tribunal for Rwanda.

May God bless the minister in this world and in the everlasting life forever, and may the Gambia and its people prosper. I had difficulty holding my tears as I hugged a great American Muslim, Muhammad Arsalan Suleman, who pushed for this case in the first place. He is the former American envoy to the Organization of Islamic Cooperation (OIC).

Alhamdu lillah humanity is alive. The Ummah is not dead. We must thank Allah for this, as we pray He will bless us with more success like this in the future insha Allah.

We had sponsored about 25 Rohingyas to be in the Hague on this occasion. As I was saying goodbye to them, I could see the smiles on their faces. Alhamdu lillah. This is a good beginning toward the long road to justice.

Both of these heroes, the Gambian minister of justice and Arsalan Suleman, will be honored by us in March. Please sign up to be a part of this gala event in Chicago.

I have a lot to say about this case but for now, here is a brief list of the winners and losers of the last three days of hearings.

I found Rohingyas to be extremely peaceful people with a lot of Sabr. In the largest refugee camp in the world, Cox’s Bazar in Bangladesh, which is currently housing over one million Rohingya refugees, I rarely found quarrels and loud voices, despite their dire situation. The Rohingya there have been fasting and praying for this case. 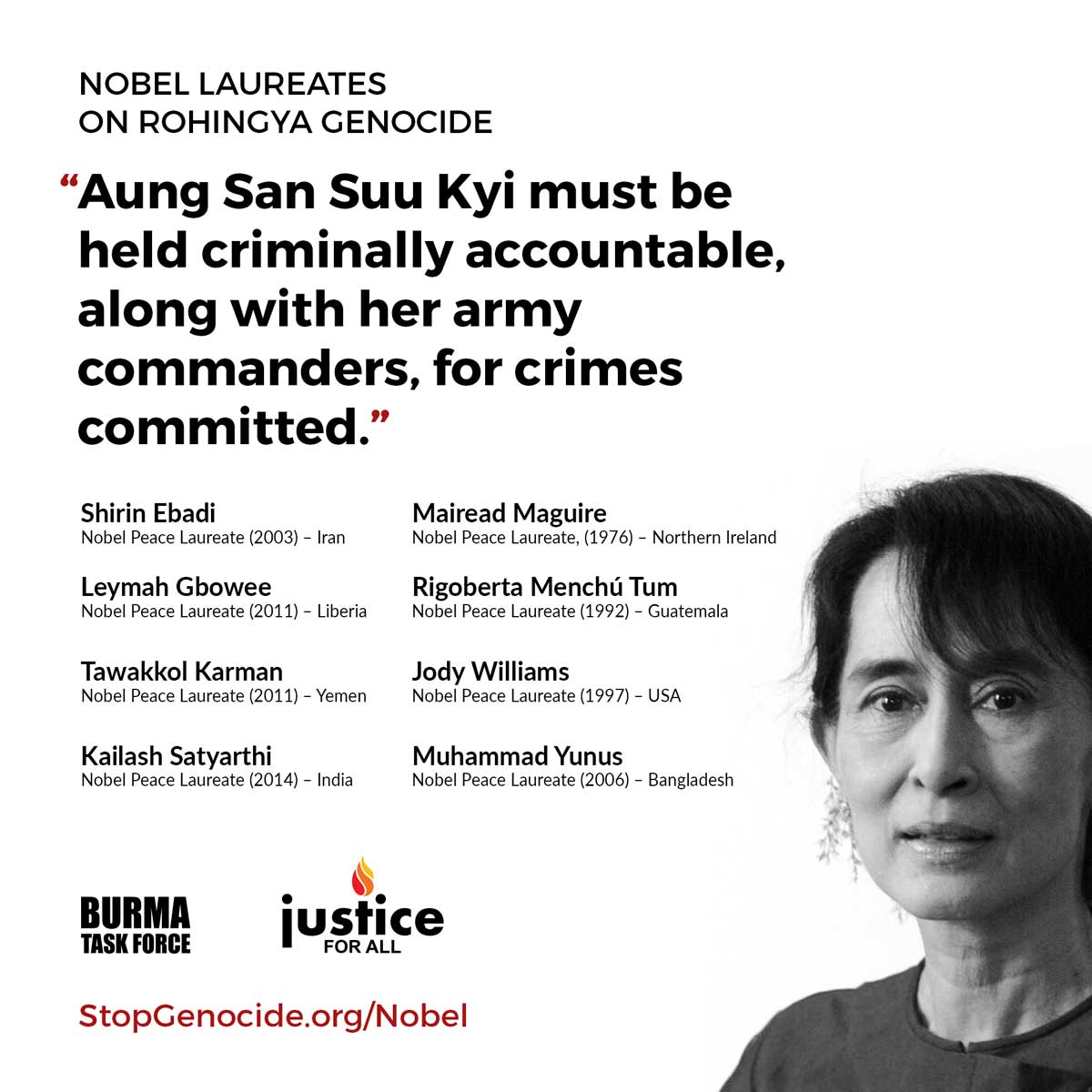 Eight Nobel peace laureates stood with them to oppose the other Nobel Laureate, Burma’s Prime Minister Aung San Suu Kyi, who came to justify the genocide of the Rohingya. Burma Task Force is pleased to have initiated this support.
All of the 57 countries of the OIC were supporting the Rohingya. So were the Kachin Christians and Karen Buddhists from Burma, who publicly stood with Rohingyas at the Hague in the face of Burma’s genocidal killers and torturers.

The smallest country in Africa came out as the tallest among nations by filing a lawsuit against a genocidal regime while no major countries did anything about it. 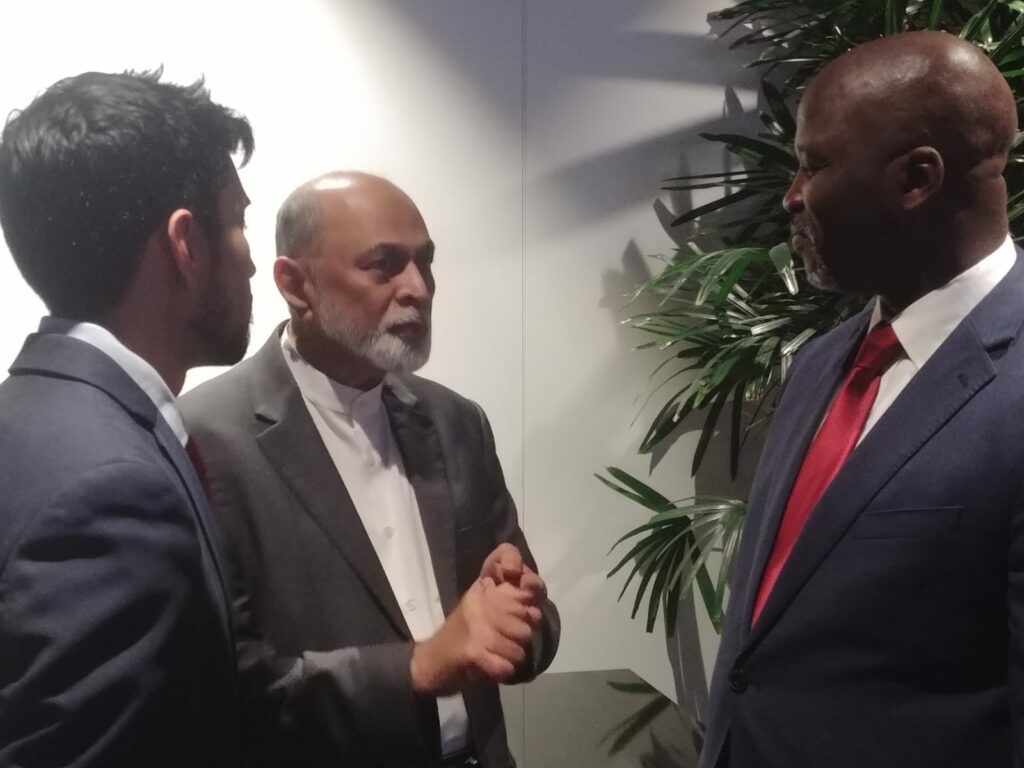 Interestingly, an African judge, Abdulqawi Ahmed Yusuf of Somalia, is the head judge of the International Court of Justice. And both sides have lawyers from various African countries addressing the court.

The International Court of Justice has played an outstanding role in pursuing justice for the Rohingyas. A journalist interviewing me shared that she has been covering the ICJ for the last 25 years, and a mere 10 or so journalists usually cover the court. This time, there were 120 journalists in the court to report. 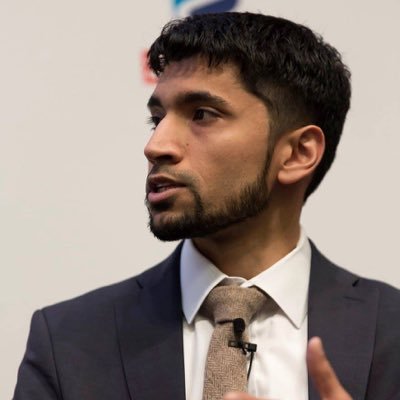 America must be proud of Muhammad Arsalan Suleman, a Pakistani-American who served as former President Barack Obama’s envoy to the OIC. But after leaving the administration, he continued his work on the Rohingya cause and worked with the Gambia to finally file this case at the International Court of Justice.
Love him and be proud of him. May Allah give His blessing in this world and in the everlasting world forever.

The European Rohingya Council, which organized two rallies in front of the ICJ in The Hague during the hearings, had a truck roaming around the court calling on Aung San Suu Kyi to admit that Burma has committed genocide and to apply in the Netherlands for asylum. 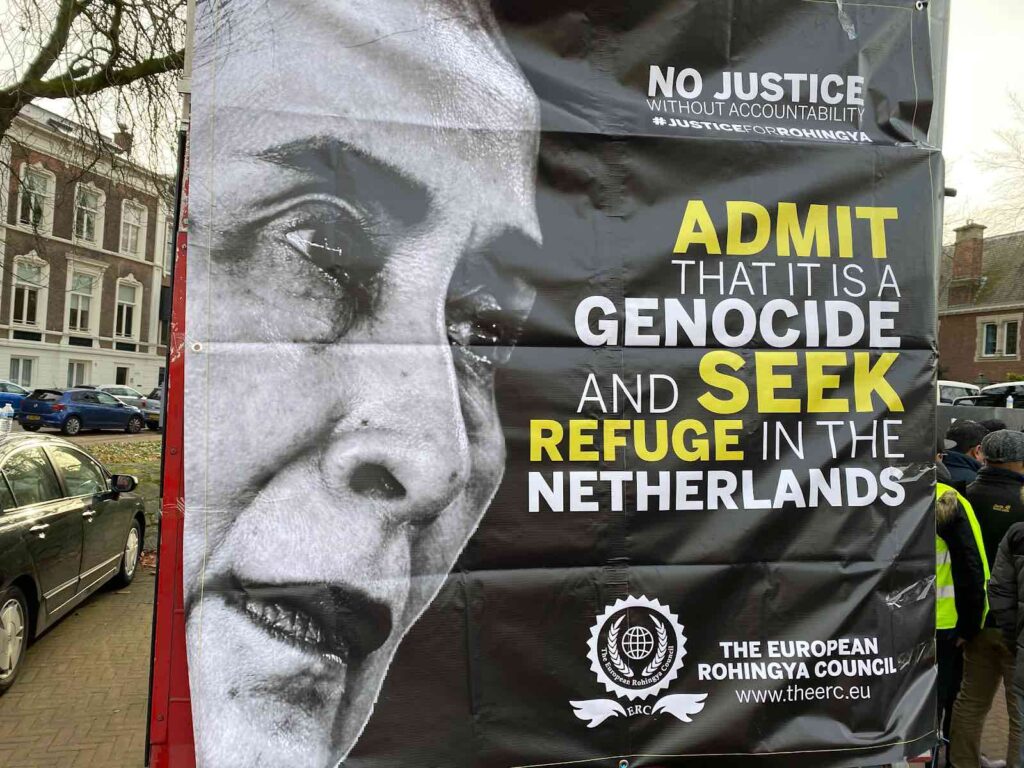 Losers of the ICJ case against Burma

Aung Suu Kyi, a Nobel Peace Prize laureate, has lost the most in the eyes of the world by coming forward to defend her country’s genocide of the Rohingya:
She failed to use the name “Rohingya”, thereby giving credence to the Gambia’s argument of genocidal denial of the Rohingyas’ existence;
She failed to commit to the restoration of Rohingya citizenship, the main issue which led to the genocide;

She brought her fallen star power as a former Nobel Peace Prize winner to the court. It had the opposite of the intended effect: the world focused on her role in excusing the genocide of Rohingyas;

Because of her visit, the Burmese public probably became aware of the genocide of Rohingyas and charges against them for the first time;
Thanks to the efforts of Burma Task Force eight Nobel Laureates condemned her saying, “Aung San Suu Kyi must be held criminally accountable, along with her army commanders, for crimes committed” against Rohingyas in Burma;
Aung San Suu Kyi repeatedly lied. Among her lies were those relating to Rohingya schools. The Burma Task Force team and I interviewed 160 Rohingya refugees. They told us that Burma’s government had shut down their schools. She, on the other hand, claimed that she and her government had given scholarships to Rohingyas.

It is not easy to defend a genocide. The lead lawyer for Burma, Prof William Schabas, was caught with his pants down in the court when the Gambian attorney pointed out by quoting him that in his capacity as an academic he himself has implied that Burma is approaching genocide.

“We’re moving into a zone where the word can be used (in the case of the Rohingya). When you see measures preventing births, trying to deny the identity of the people, hoping to see that they really are eventually, that they no longer exist, denying their history, denying the legitimacy of the right to live where they live, these are all warning signs that mean that it is not frivolous to envisage the use of the term genocide.”

Loser No. 3: The Dutch Muslims and their Neighbors:

Despite having almost one million Muslims within a 100-mile radius of the court, the rally in front of the ICJ in support of the Burmese government was four times larger than the rally supporting the Rohingyas, which consisted mostly of Rohingyas.

Only two or three Netherlanders stood with the Rohingya victims of genocide, even though their country supports the Gambia’s case against the Burmese government’s genocide, along with Canada.

It might take a couple of weeks before judges decide whether they will grant provisional measures ordering Burma to protect the remaining 600,000 Rohingyas in Burma and preserve the evidence of genocide. Read court documents watch videos here.

As I walked miles and miles in the Rohingya camps in Bangladesh talking to dozens of Rohingya refugees on a daily basis during my two visits last year, the first thing they would ask for is justice. Therefore, Burma Task Force engaged two British Barristers (lawyers) to submit a case for Rohingya victims in the International Criminal Court (ICC). Burma Task Force had also filed a civil lawsuit in the United States in 2014 against Burmese leaders. There was another case in Australia. Tun Khin, the President of Burmese Rohingya Organisation UK , recently filed another case in Argentina against Burma.

May Allah protect the Rohingyas, bless them with more Sabr, courage, and wisdom. May He unite them to stand together for justice. May God Almighty guide the Burmese and their leaders to the right path.

Interfaith Letter To The Gates Foundation on Modi’s Award

Dear Mr. and Mrs. Gates: As diverse Americans, we very much appreciate that the Bill…